Take me back to Board of Directors 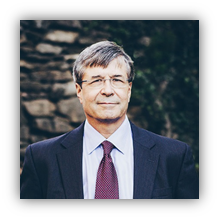 As the son of a career naval officer, Cary Hall moved frequently while growing up. He now views Greenville as his hometown, even though he first lived here as an adult. After graduating from Princeton University in 1969 he spent three years in the Army. He was awarded the Bronze Star while serving as an infantry platoon leader in Vietnam in 1971. He attended and graduated from Harvard Law School in 1975.

Cary has practiced law with the Wyche Law Firm in Greenville since 1975 as a corporate and tax lawyer. Cary's practice is evenly divided between general corporate and transactional matters and tax law. He also represents a number of nonprofit organizations and is active in conservation matters as an authority on the law of conservation easements in South Carolina. Cary has been recognized as one of the "Best Lawyers in America" for nearly 20 years. Cary and his wife, Pam, life in Greenville, SC.